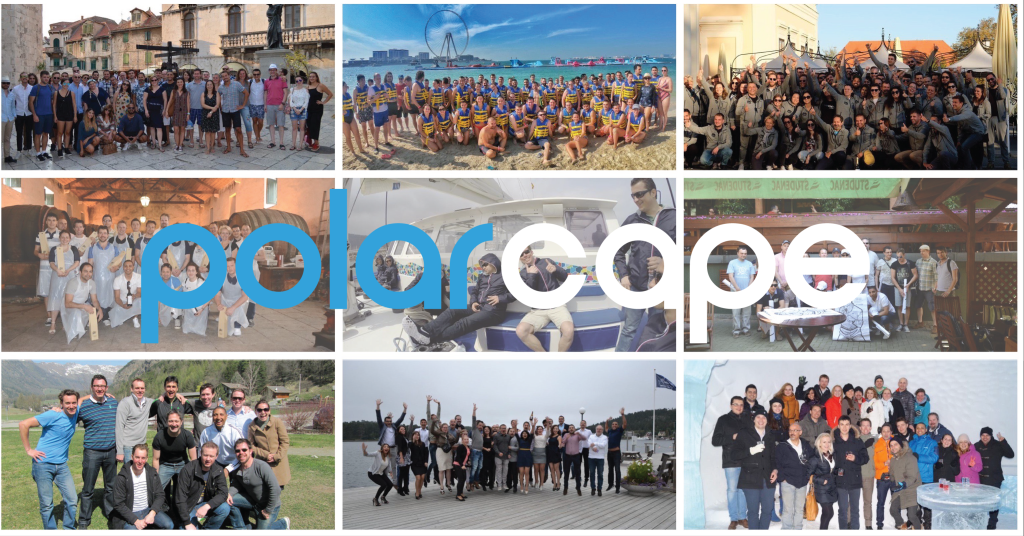 Usually, around this time of year, all of us come together, Swedish and Macedonian office and we have a great weekend on some amazing location together. We use this time together to get to know each other better and through our conferences during those three days to create more effective teams and also work on ourselves as much as we can. Because with great individuals come great teams and a remarkable company, that is Polar Cape. But apart from great work that is done during these kick-offs, we also have a lot of fun. These weekends are usually filled with activities and adventures that we undertake together.

This year, unfortunately, we did not have the chance to have this amazing experience. Instead we will have a “live” kick off, as most of the things this year we are taking the kick-off online as well, with discussion sessions and fun in a virtual setting!

And next time we meet IN person again, will make that` kick-off an UNFORGETTABLE one! For now, we will enjoy going through these pictures and being grateful that we work with the best colleagues and people we very much enjoy spending time with, not only at work, but in our free time as well!

We chose one photo from each trip, but the choice was very hard, there were so many memories worth sharing! The trip down memory lane starts in 2011 at Polar Capes first Kick off in Champoluc, Italy

Simon Forshaw, CEO:  Our first ever Kick-off!  There were only 12 of us back then, and we decided to make it a ski-trip. We went to Champoluc I-in taly in spring, and stayed in a beautiful chalet by a river.  We had some beginner skiers who took their first ever ski lessons, and we had some advanced skiers who got to go on a heli-ski trip to the top of the glacier and all the way down to the bottom of the mountain and the soft spring snow.  It was memorable!  Besides that we had some great workshops about what a ‘Great Consulting Company’ means to us – the output is still very much in use today!

Jonas Jakobsson: This is a photo of Polar Capers making wine in Portugal. We then poured the wine in bottles and made our own logo. That made an excellent souvenir!

Dragan Miladinoski: This was a day for activities in Skopje. We were divided in two groups. One group was going paragliding and the other group went to an indoor shooting range. You can see here that Stojan is wearing a hat as the best contestant that day in this discipline.

Stojan Peshov: The traditional group photo at the 2014 kick off in Bjorkliden, Sweden. It was taken when we went for drinks at the Ice bar and before the gala dinner at the Ice Hotel which is the world`s first and largest hotel made of ice and snow. Amazing experience!

Jakov Manojlovski: The whole company was cruising and sightseeing around Barcelona on a Catamaran. Some of us were a bit tired from the company activities the night before, so took this time to rest.

Elena Andova: My first kick off was in Ulvön – for me it was a testimonial of the native company’s culture. Heart-warming hosts, small house cottages, fish delicacies like Surströmming, barbeque in the open and the sauna in the woods, made their way to a special spot in my mind. However, in the calm, peaceful nature of the island, we were up for some challenging “get to know each other” team games that ended with the first time ever award ceremony and dance-party evening afterwards. We were all “jump in the air” happy that we made such a great team!

Ivana Gligorovska: The traditional PC group photo! That was a day filled with activities. At the end of it, we were on our way to the best ever, most epic beach party! Lots of cocktails and mid-night swimming . Unforgettable.

Nena Kitanska: It was my first kick off and I couldn’t imagine a better way to meet everyone since I was only one week in Polar Cape at the time. One of the best moments I remember was the ‘Horror’ theme party where one of the guys was dressed as Donald Trump with his face as a mask, it was hilarious. And I really liked the bike & beer tour through Prague as well. This photo was taken before we started an all company scavenger hunt around the castle searching for clues.

Mila Trajkovic: This photo was taken before what was supposed to be a race between teams in the aqua park you can see in the background. But, since it was not easy to maintain balance on it, we were all falling in the water all the time, so we ended up just hoping we can even finish it individually. Apart from this, our trip to the desert and the “1001 night” party were the best memories from Dubai. As the DJ said that night: “You guys made the best company party I have ever attended!” Well, that`s easy when you work with the greatest colleagues 🙂